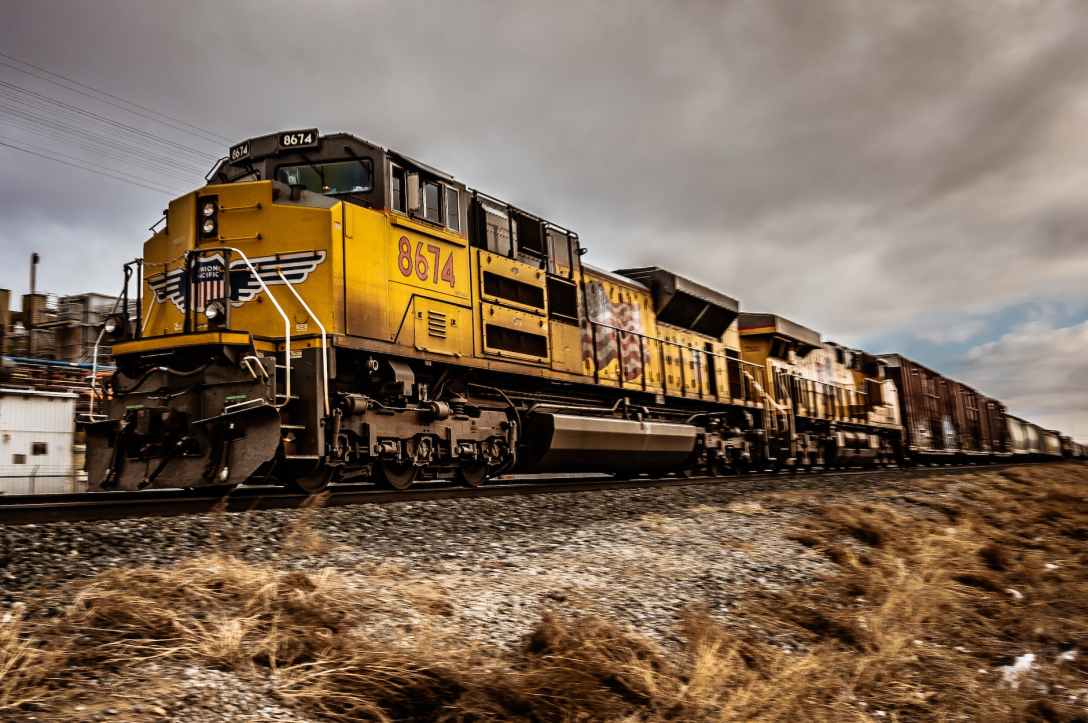 The President’s plan to avert a catastrophic rail strike he already claimed victory for averting is to force unions who rejected his plan to accept it via legislation.  The irony of a supposedly pro-union President forcing unions to his will could not be richer, except that some Republicans are all too willing to bail him out from his own disaster with nothing in return.

In September, President Biden claimed victory in averting a potential rail strike after negotiations between twelve unions and transport companies broke down, threatening to cost the American economy $2 billion per day.  At what CNN described as the “12th hour” the President personally interceded in the discussions via a phone call to all parties.   “Failure wasn’t an option here,” a source with direct knowledge of the call said. “Everyone knew the stakes, but the President really hammered home how deep and catastrophic leaving without an agreement would be for the entire country.”  The next day, President Biden delivered what was described as a “celebratory speech” at the White House.  He claimed the agreement he helped broker would “avert any significant damage” from a rail shut down and described it as a victory for the “dignity” of rail workers. This “is a win for tens of thousands of rail workers and for their dignity and the dignity of their work. It’s a recognition of that,” he said.  He went further and claimed it was a “big win” for the entire country.   “Together, you have reached an agreement that will keep our critical rail system working and avoid disruptions of our economy,” he told an audience in the Rose Garden.  “This agreement is validation – validation in what I’ve always believed: unions and management can work together.”  The mainstream media was thrilled.  “Biden’s economic team, battle tested by months of port and trucking supply chain crunches, has shifted its well-honed, cross-agency supply chain contingency planning into high gear,” CNN gushed in a supposed news article, claiming  the administration “struck a delicate political balance” in making the deal.

The only problem:  Four out of the twelve unions ultimately rejected the deal and one assumes victory itself.  These unions include Brotherhood of Maintenance of Way-Employees Division (BMWED), the Brotherhood of Railroad Signalmen (BRS), the International Brotherhood of Boilermakers (IBB), and the Transportation Division of the International Association of Sheet Metal, Air, Rail, and Transportation Workers (SMART-TD).  In total, they represent about 56% of the workers engaged in the talks.  Despite the President’s victory lap and the accompanying gush of support from the media, the deal proposed was not binding in any way.  It was a temporary measure that provided another six weeks to finalize the details, but the devil is in those details as they say.  A third of the unions cried foul over what they perceive as inadequate sick leave.  “The railroads have made billions off of their workers. These are incredibly skilled jobs where sophisticated pieces of equipment are used. The workers do not feel valued,” explained the BMWED.  “Workers need to be able to take off when they are sick. Under the present policy workers are penalized. Railroad executives are so deep into their own bubbles they think all of this is ok.”  In that regard, Reuters reported that unions asked for 15 paid sick days, but the railroads and the original President Biden endorsed deal had only one personal day.  “There’s a lot of anger about paid sick leave among the membership” who kept working during the COVID-19 pandemic, explained Seth Harris, a professor at Northeastern University”  “Despite making record profits year after year, pumping up their stock prices to unheard-of levels, downsizing the workforce by furloughing 30 percent of the employees and becoming some of the most profitable corporations on Wall Street, the Class One carriers somehow cannot afford to provide sick time for their hard-working and dedicated employees,” noted Jason Doering, general secretary of Railroad Workers United, in a statement.

As a result of the dispute, a strike was once again imminent despite President Biden’s promises to the contrary and claims of victory before he decided to intervene again on Tuesday.  Suddenly, the President, staunch friend of labor that he is, announced that he planned to force the unions into accepting the deal they already objected to via legislation.  He called on both Chambers of Congress to immediately pass bills that will supersede negotiations and thwart the will of union members.  The irony could not be more rich.  “I am calling on Congress to pass legislation immediately to adopt the Tentative Agreement between railroad workers and operators – without any modifications or delay – to avert a potentially crippling national rail shutdown,” he said in a statement.  In other words, President Biden has declared war on the very unions he claims to support, less than two months after he bragged about securing victory on their behalf.  He seems to be aware of the irony of this predicament, noting “As a proud pro-labor President, I am reluctant to override the ratification procedures and the views of those who voted against the agreement. But in this case – where the economic impact of a shutdown would hurt millions of other working people and families – I believe Congress must use its powers to adopt this deal.”  He too acknowledged the dispute over sick leave, but said he wouldn’t do anything about it. “I share workers’ concern about the inability to take leave to recover from illness or care for a sick family member. No one should have to choose between their job and their health – or the health of their children.”  Still, “It’s not an easy call, but I think we have to do it,” the President said before meeting with bipartisan lawmakers at the White House to discuss the legislation. “The economy is at risk.”

Thus, the still Democrat controlled House of Representatives and Senate are going to be in the highly uncomfortable position of forcing their progressive members to vote in favor of a bill rejected by the very unions they claim to champion.  Even progressive friendly Vox.com admitted that “addressing [the] situation [has] been difficult for the party politically, as it’s sought to juggle competing interests.”  Outgoing Speaker of the House Nancy Pelosi moved quickly, however, taking up and passing the legislation the very next day.  Senate Majority Leader Chuck Schumer concurred, saying  “You need to act a few days before that, because a lot of the suppliers stopped sending their stuff on the trains if they think there’s a possible shutdown.  For instance, chlorine, to preserve water supplies in many towns and cities, would not go on those trains.”  Not all progressives are on board, however.  Vermont Senator Bernie Sanders is demanding an amendment that guarantees sick time, which appears to be their plan to both resolve the impasse and provide a fig leaf for union support.  Putting this another way, they also want to arbitrarily rewrite the agreement their own President championed and called a victory, an irony among ironies.  “At a time of record profits in the rail industry, it’s unacceptable that rail workers have ZERO guaranteed paid sick days,” the Senator said on Twitter. “It’s my intention to block consideration of the rail legislation until a roll call vote occurs on guaranteeing 7 paid sick days to rail workers in America.”  Representative Jamal Bowman agreed, “Listen, I can’t in good conscience vote for a bill that doesn’t give rail workers the paid leave they deserve.  We fumbled this in Build Back Better, we can’t do that again.”

Incredibly, Republicans appear divided on the issue, rather than allowing a President of the opposition party to be hoisted on his own petard so to speak, ignoring the old rule about never interfering with an enemy in the process of destroying themselves.  Minority Leader Mitch McConnell jumped out in front of the issue as if it were a passing train, pardon the pun, promising swift passage of a bill without making any demands of his own.  Don’t get me wrong:  I understand the desire to avert a potential crisis, but – as the President himself said – politics requires hard choices.  It is the President, however, who has failed to make them so far.  The hard political choice for Republicans now – or easy depending on your perspective – is to do absolutely nothing to help, especially when successful passage of a bill resolving the impasse will only be seen as a victory for that President.  There will not be a media outlet in the country that praises Republicans for their bipartisanship in the face of crisis, nor will President Biden himself cease his relentless attacks on Republicans as recalcitrant Confederates and a threat to democracy.  The GOP stands to gain absolutely nothing by helping to avoid a crisis of the President’s own making and therefore they should do nothing.  The messaging could not be simpler:  He broke it, he bought it.  This is the President the American people elected.  We warned you he was incompetent and couldn’t be trusted, but it’s his job to fix it.  Indeed, the Democrats are already using this as an issue to cudgel Republicans into embracing their agenda.  Senator Sanders asked, “You have a number of Republicans who claim, who claim to be supporters of the working class. Well, if you are a supporter of the working class, how are you going to vote against the proposal which provides guaranteed paid sick leave to workers who have none right now?”  The answer is simple:  We’re going to vote against it because your party created this disaster after claiming credit for fixing it.  Perhaps, President Biden and the media should have waited on the victory lap in September until the deal was actually done.  If you want our help, we will pass a bill with concessions on other controversial issues.  Otherwise, you still control both Houses of Congress and can pass a bill on your own.  Your move.

Instead, 79 Republicans in the House voted in favor of the bill to prevent the strike.  Eight Democrats voted against it, meaning the Republicans provided the necessary votes to secure passage and potentially bail out a failing President while receiving absolutely nothing in return.  What’s the old saying about friends like these?