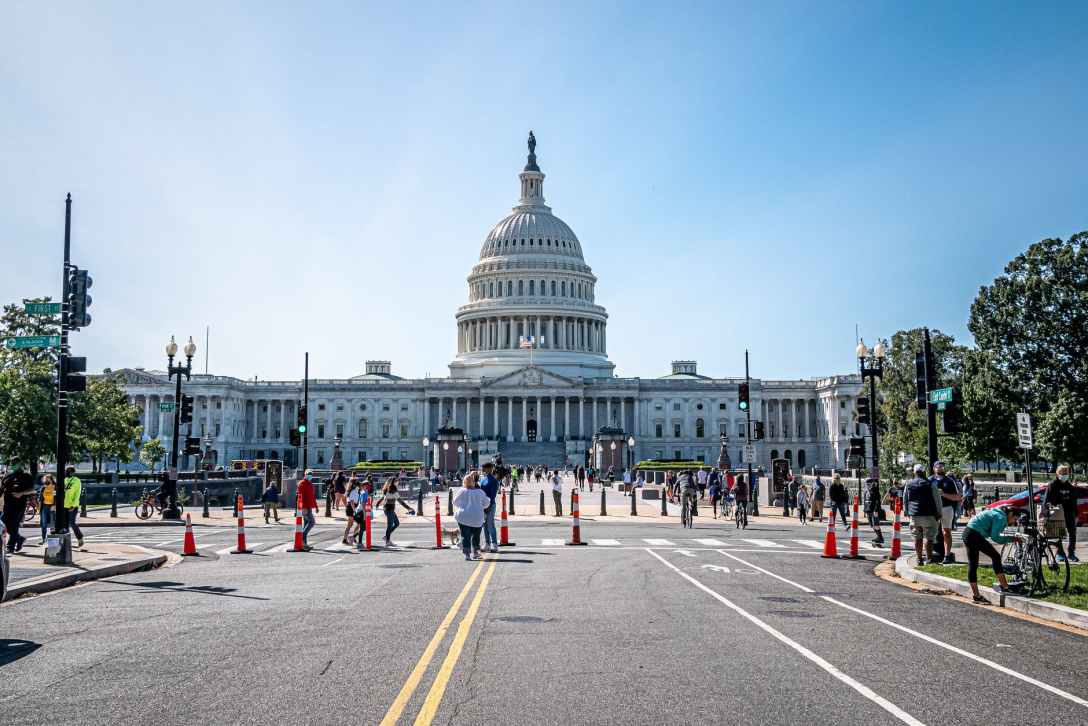 Can someone please ask Barack Obama, Chuck Schumer, and Joe Biden why they were supporting racism for decades by liberally using the practice?  They were all for it before they were against it, but now the filibuster is a very bad tool of white supremacy, amazing how that works.

Former President Barack Obama set the stage for the new phase of the attack on an almost 180 year old institution last July.  While delivering the eulogy for the late civil rights icon, John Lewis, he described the Senate filibuster as “another relic of Jim Crow.”  The torch has now been picked up by race-hustling Reverend Al Sharpton who plans to pressure the handful of Democrats that haven’t changed their mind about the longstanding practice, claiming it’s inherently racist.

“The pressure that we are going to put on Sinema and Manchin is calling [the filibuster] racist and saying that they are, in effect, supporting racism,” he said. “Why would they be wedded to something that has those results? Their voters need to know that.”  “Many of us, and certainly all of us in the civil rights leadership, are committed to policies and laws and causes, not to people’s political careers. We’re not into that. We want to change the country,” Sharpton continued. “And if there is not feasible evidence that we’re doing that, it is not in our concern to be aggressively involved.”

Mr. Little laments that, “Among those present at the dawn of the filibuster’s new era was a young Senate intern named Mitch McConnell – and more than 40 years later, as Senate minority leader, McConnell would usher in a filibuster era all his own.”  He concludes, “Which brings us to the essential difference between the obstructionists who defended white supremacy and the obstructionists of today. First, a similarity: just as was the case 75 years ago, the filibuster makes it impossible to pass meaningful civil rights laws. But unlike the Jim Crow filibuster, the McConnell filibuster makes it impossible to pass nearly all other meaningful laws as well.”

This might perhaps be a concern if these statements weren’t completely false on their face.  Yes, the filibuster prevents the passage of many pet projects much desired by liberals and conservatives when they are in power, but to suggest it prevents the passage of both any civil rights legislation and other meaningful laws is complete nonsense.  Trump, in fact, passed a major piece of civil rights legislation as recently as December 2018.  The First Step Act, usually known as criminal justice reform, sailed through the Senate 87 votes to 12.  Also during Trump’s tenure, we saw passage of the largest trade deal in 30 years, the United States-Mexico-Canada Agreement, by a vote of 89 to 10.  Likewise, the massive Coronavirus Aid, Relief, and Economic Security Act passed in 2020 by 96-0.

This was all in one of the most partisan eras in recent history. Prior to Trump, former President Obama was also able to secure passage of major bills with Republican support including Wall Street Reform (Dodd-Frank), 60 to 39, and the Budget Control Act of 2011, 74 to 26.  George W. Bush also had his share of major legislative victories, No Child Left Behind, 91 to 8, the PATRIOT Act, 98 to 1, Homeland Security Act, 90 to 9, and the Medicare Prescription Drug, Improvement, and Modernization Act, 61-39.

These major bills, addressing everything from security, to trade, to education, to civil rights, to big business, to the budget, clearly aren’t nothing.  Moreover, writers like Mr. Little and his editorial staff, surely know this and are intentionally lying.

What they really mean to say is the filibuster is preventing the passage of their preferred left-wing legislation.  Mr. Little continues to repeat this lie, as if the more times he prints it, the more likely it is to come true, claiming that the budget reconciliation process is the only way to pass major legislation.  “What is supposed to be the world’s most august lawmaking body has rendered itself able to pass major legislation either once a year or not at all. The Jim Crow filibuster’s great shame was that it divided America into two separate and unequal nations – one a functional democracy, the other a racist apartheid regime. The McConnell filibuster’s great shame is that it does away with functional democracy nationwide.”

Of course, lamenting the lack of “functional democracy” is the new go-to phrase when liberals don’t get what they want, becoming almost as popular as smearing their opponents and anything they don’t like as racist.  In Mr. Little’s paranoid fantasy world, “while the Jim Crow filibuster was more morally reprehensible, McConnell’s is a far greater threat to our republic. The institutions essential to our democracy – from our courts to our voting systems to the peaceful transition of power – are under unprecedented assault.”

Perhaps he could ask some liberal politicians why they were all for the filibuster until last year. You see this type of ridiculous hyperbole would be easier to accept if many of the very same players now calling the filibuster racist and a threat to democracy weren’t saying the exact opposite when it was politically convenient for them.

Before Obama declared it a relic of Jim Crow, he was quite the fan of the practice.  In 2005, he took to the floor of the Senate, explaining that what the American people “don’t expect is for one party, be it Republican or Democrat, to change the rules in the middle of the game so they can make all the decisions while the other party is told to sit down and keep quiet.  The American people want less partisanship in this town, but everyone in this chamber knows that if the majority chooses to end the filibuster, if they choose to change the rules and put an end to democratic debate, then the fighting and the bitterness and the gridlock will only get worse.  I understand that Republicans are getting a lot of pressure to do this from factions outside the chamber, but we need to rise above the ends justify the means mentality.”

Current Senate Majority Leader Chuck Schumer was also a big fan of the filibuster, “We are on the precipice of a crisis. A constitutional crisis. The checks and balances which have been at the core of this republic are about to be evaporated by the nuclear option,” he said, when discussing the filibuster along with Obama in 2005. “The checks and balances which say that if you get 51% of the vote, you don’t get your way 100% of the time.”  He described the discussions themselves as “almost a temper tantrum by those on the hard, hard right,” who “want … their way every single time.”  “They will change the rules, break the rules, misread the Constitution so that they will get their way,” he declared. “That…is what we call abuse of power.”

Notice how neither of these Democrat party leaders said one word about racism, white supremacy, Jim Crow, or any threat to democracy inherent in the filibuster.  Instead, they described removing the filibuster as a “constitutional crisis” and an “abuse of power.”  The filibuster itself is conceived as something at the “core of this republic.”  Eliminating the practice is the “ends justify the means” and an “end to democratic debate.”  How precisely did they miss all the racism and white supremacy they were actively supporting?

Current President Joe Biden also supported the filibuster back then, describing his statement on the floor of the Senate about it as “I think it may be one of the most important speeches for historical purposes that I will have given in the 32 years since I have been in the Senate.  At its core, the filibuster is not about stopping a nominee or a bill — it’s about compromise and moderation.”

These days, however, he seemed quite confused about the practice to say the least.  At last week’s press conference, CNN’s Kaitlan Collins asked the President if he agreed with Barack Obama that the filibuster was a relic of the Jim Crow era.  He quickly replied, “yes,” but then when asked why not abolish it, he paused for close to five seconds, rubbed his face, and then meandered into a speech about how electoral politics is the “art of the possible.”  He paused yet again, then said “Let’s figure out how we can get this done and move in the direction of significantly changing the abuse of even the filibuster rule first.”

No mention was made that most of the “abuse” of the filibuster that has occured over the past 5 years has been at the hands of Democrats obstructing, to use their own word, President Donald Trump’s agenda.  Yes, you read that right:  President Biden is concerned about the abuses perpetrated by his own party.  In other words, nice little Senate you have there, be a shame if anything happened to it.

Amazingly, he seemed even more confused at another point in the press conference, saying “I have never been particularly poor at calculating how to get things done in the United States Senate. So, the best way to get something done if you…if you hold near and dear to you…that you like to be able to…anyway, I—we’re going to get a lot done, and if we have to, if there’s complete lockdown and chaos as a result of the filibuster, then we’ll have to go beyond what I’m talking about.”

Does anyone know what he’s talking about?

As best I can tell, he is implying that we can keep the long standing practice, and according to Barack Obama and Chuck Schumer our constitutional order and republic and democracy itself, if it’s convenient for him.  Otherwise, they’ll toss it and, of course as we have seen here, lie about it, repeatedly, but what else is new?

This is the way of the modern Democrat party and especially it’s liberal wing:  Everything preventing them from ushering in a Democrat socialist utopia is irredeemably racist and a threat to democracy.  Therefore it must be purged, whether a practice or a person.  It never occurs to them to, I don’t know, pass bills that can get 60 votes.  Clearly, that’s too much to ask for, why would any politician in America today want to pass laws that people actually want?