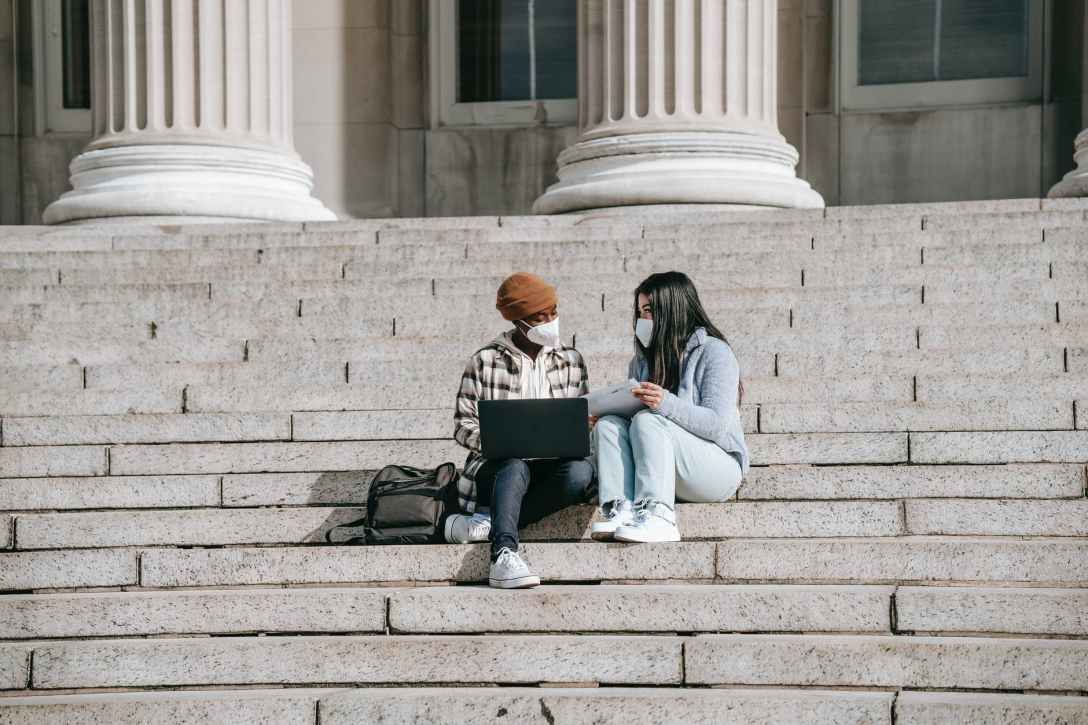 Then President-elect Biden promised to reopen schools in his first 100 days.  Now, we learn that promise actually meant 50.01% of schools open at least one day a week, meaning schools don’t really have to open this year.  “Hopefully it’s more,” they say.  Well, hopefully more students don’t commit suicide in the meantime.

There’s nothing like setting ambitious goals and then working diligently to achieve them.  Even if you don’t fully succeed, if the goal was lofty enough, even a partial success counts for something.  And so in December, then President-elect Joe Biden set a goal to reopen the “majority of our schools” in his first 100 days in office.  Less than thirty days in office later, he’s filling in the fine print and it’s not pretty.

Press Secretary Jen Psaki explained, “His goal that he set is to have the majority of schools — so, more than 50% — open by day 100 of his presidency.  And that means some teaching in classrooms. So, at least one day a week. Hopefully, it’s more.”  Apparently, even Ms. Psaki realizes how pathetic this goal actually is, especially as Biden previously specified that highschools and colleges weren’t included, cutting the number of schools covered practically in half.  “Certainly, we are not planning to celebrate at 100 days if we reach that goal,” she clarified. “We certainly hope to build from that.”

In other words, schools won’t need to open up this year at all.  Barely half the schools open one day a week by the end of the school year is the equivalent of not open at all.

This is after the Biden campaign website complained that “Trump has done effectively nothing to help schools or child care providers reopen,” claiming that opening school is “perhaps the single most important step to get parents back to work.  While schools stay closed, parents are struggling and students, especially low-income students and students of color, are falling behind.”  Then candidate Biden, asserted he “would mobilize the federal government, in cooperation with educators, child care providers, unions, communities, and families, to take decisive action”

This decisive action apparently requires a lot of money before anything can happen.  Rochelle Walensky, the director of the Centers for Disease Control and Prevention told Fox News Sunday, “I think we need a lot more resources in order to get the schools safe.”  Amazingly, she continued, “One of the things that’s really been emphasized in the school reopening is how unsafe some of our school ventilations are.”  In addition to COVID-19, Walensky claimed, “that’s a problem for other respiratory viruses, for children with asthma, for exposure to mold…there’s a lot of work we need to do in order to get our schools to a safer environment.”

Yes, the coronavirus reopening plan is suddenly much bigger than coronavirus, some unspecified safety upgrades are required to make schools more safe in general.  Who knew?  We just know it’s going to be expensive.  Under Biden’s proposed coronavirus relief legislation, schools would get nearly $130 billion in additional funding to, presumably, achieve these goals.

According to Chalkbeat.org, that comes to approximately $2,600 per student, though the precise amount will vary by district with high poverty districts benefiting the most.  This is after $67 billion has already been allotted to school safety in the previous coronavirus relief bills and many schools are already fully open even without the money.

In November and December 2020, Education Next surveyed 2,155 parents with children in K-12.  28% of the parents surveyed reported their children were receiving fully in person instruction.  60% of parents reported their child is learning less than they would be without the pandemic, and of course satisfaction levels are highest while loss of learning is lowest for parents with children going to school full time.

Unfortunately, the numbers are not promising for poor, especially minority students.  42% of high income students have access to in person learning compared to 29% of low income students.  54% of white students, compared to 33% of hispanic and black students, even 51% of Republicans compared to only 35% of Democrats.  Not surprisingly, 69% of all students choose in person when offered, including 72% of high income and 71% of low income, yet while 76% of white parents choose in person, only 56% of blacks do so as well.

It is a sad irony of our times that an administration devoted to a philosophy of equity, using government money and power to address disparities in race and income, is currently condemning the very people they claim to want to help the most to the wilderness of remote learning.

Who do they think is being hurt by these closures?

The damage goes well beyond lost education.  Young people are literally dying.  In late January, The New York Times reported on a spike in student suicides in Las Vegas, NV.  18 students in the Clark County School District have taken their own lives since remote learning began in March 2020, double the number of the previous year.  “When we started to see the uptick in children taking their lives, we knew it wasn’t just the Covid numbers we need to look at anymore,” Jesus Jara, the superintendent of the district, told the Times. “We have to find a way to put our hands on our kids, to see them, to look at them. They’ve got to start seeing some movement, some hope.”

The Clark County School District uses an alert system called GoGuardian Beacon that scans student writing and search activity on school-issued iPads.  Officials are notified if a student enters a term that could indicate a mental health issue.  3,100 alerts were generated between June and October alone.  “I couldn’t sleep with my phone nearby anymore,” Jara told the Times. “It was like a 24-hour reminder that we need to get our schools open.”

It’s fair to assume that similar stories are playing out across the country, and that students on the low-end of the income scale, stuck in smaller houses and apartments than their wealthier classmates, with less access to amenities to make life easier, perhaps members of single family households, are suffering much more so than anyone else.

This is especially true when most private schools are fully open.  If you can afford it, you have options.  CNBC reports that, even as early as mid-October, 6 in 10 private schools were in person, and only 5% were online.  “My phone is ringing off the hook with New York City public school families applying to private middle and high school,” said Emily Glickman, president of Abacus Guide Educational Consulting in New York.  “I’ve never seen anything like it in terms of people calling me this late into the fall,” she continued. “There’s an explosion of families looking to make a last-minute change.”

These families, of course, are those that have the means.  The underprivileged remain at the whims of the teacher’s unions and the Biden administration.  Fortunately, the mainstream media and even some more liberal groups are starting to understand the damage being done and hopefully mobilizing to do something about it.

The Associated Press asks “Is one day a week enough?” noting, “President Joe Biden is being accused of backpedaling on his pledge to reopen the nation’s schools after the White House added fine print to his promise and made clear that a full reopening is still far from sight.”

Benjamin P. Linas, an epidemiologist writing for Vox.com, says, “as we approach the one-year anniversary of remote education in America, I find that I am losing sympathy for the educators’ position and their myopic vision this far along into the pandemic. We can open schools safely, and we have the evidence in hand to prove it.”  Mr. Linas cites information from Scotland, Singapore, France, North Carolina, Wisconsin, and Atlanta in support of this claim, concluding “most private and parochial schools across America have been successfully open for the school year — many having seen an increase in enrollment for this reason — while most public school districts have been either partially or fully remote. We cannot allow these repugnant inequities to fester any longer.”

Rebecca Bodenheimer, PHD, a self-described progressive, posted “A progressive parent’s rant about the politics surrounding school reopening” on Medium.  “I just don’t know how anyone can sit by and think this is an acceptable state of affairs for a developed country — it just makes my blood boil to see how little this country cares about kids.”  She continues, “The politicization of this issue is what’s really fucked up. Schools are largely open in red states and closed in blue ones (see below for a devastating graphic). It’s very difficult for me to understand the simplistic thinking that says: Trump said open schools, so we must keep them closed at all costs. I have never felt so alienated from the people I usually align myself with politically.”

I hate to say I told you so, but this should have been obvious to anyone even remotely following the campaign last year.  Then President Trump regularly insisted that then-candidate Biden would continue the lockdowns, indefinitely.  At a rally in Goodyear, AZ, Trump said “If you vote for Joe Biden it means no kids in school, no graduations, no weddings, no Thanksgivings, no Christmas, and no Fourth of July together.  Other than that you’ll have a wonderful life.”

Then, as now, Biden punted, refusing to rule out further lockdowns, offering only nonsensical blather about letting “science drive our decisions.”  Adding, “I do promise this: We will start on day one doing the right things.”  Apparently, the right things don’t include forcing schools to open and, actually, following the science on schools.  Please note:  I’m a federalist, but don’t tell me there’s nothing the Federal Government can do to force the issue.  They control billions in funding.  Biden can make this happen.  He is choosing not to, for whatever reason.

Therefore, Biden lied and students died.  Is that a bit of an exaggeration?  Probably, but the sad underlying truth is there is currently no one in the federal government advocating for a rapid return to normal.  The tragic situation at our schools is only one example.  The lockdowns are wreaking havoc on education, family life, social life, businesses, and other organizations, and yet neither Biden nor his team seem keen to end them.  Where we go from here is anyone’s guess, 11 months to slow the spread later.